Conventions consultant Rick Taylor is excited. Having attended the flagship global event for the Institute of Business Travel Management events portfolio – held in Barcelona in December – he is bullishly optimistic about the meetings, incentives, conferences and exhibitions (MICE) space in Africa, which was a major focus of the event.

‘It really is time that the world’s meetings industry stepped out of its comfort zone and discovered new experiences,’ says Taylor. ‘Africa is an attractive destination, with stunning people and competencies. Africa is open for business.’

As someone deeply immersed in this space, he should know. Taylor was the strategic architect behind the Cape Town Convention Bureau before heading up the South African National Convention Bureau (SANCB), and since then has driven the Business Tourism Company – a tourism economist consultancy focused particularly on East Africa (Ethiopia, Uganda, Kenya, Mozambique, Tanzania and Rwanda), with tentacles in West Africa.

Julie-May Ellingson, CEO of the Cape Town International Convention Centre (CTICC), agrees – adding that, globally, Africa is the meetings destination to watch. ‘A number of new centres have opened, which are also driving more conferences to the continent.’ The knock-on effect of this slice of the tourism pie is significant, especially considering business travellers reportedly spend considerably more than leisure travellers, and many return to a destination.

Simply put, more business travellers mean more leisure travellers, which provides a shot in the arm for sluggish economies. And with the MICE market valued at US$30 billion globally, it’s little wonder governments and the private sector want a slice of this pie.

At the opening of the 2017 Meetings Africa event (held at the Sandton Convention Centre in Johannesburg in February), Derek Hanekom – then South Africa’s Minister of Tourism – highlighted the economic value of this space, adding that in South Africa, ‘bleisure’ tourism (as it is known) holds great potential, particularly from the rest of the continent.

According to Shaun Bird, general manager of the Sandton Convention Centre: ‘Around half of the delegates travelling to South Africa for business are accompanied by another person on these trips, with a large number of interviewed delegates accompanied by over three companions.

‘This has a knock-on effect for not only the accommodation sector, but also the hospitality, transportation and retail sectors,’ he says.

‘Recognising the ability to boost tourism receipts via the sector and infrastructure development throughout the continent has accelerated,’ says Taylor.

According to economics analysts Oxford Business Group, Kenya’s tourism industry is ‘increasingly turning to the business travel segment to make up its tourism shortfall (in some cases attributed to safety and security fears), with emphasis being placed on the MICE space’.

The country has been actively bidding for conferences over the past few years. In 2015, for example, Kenya hosted the 10th World Trade Organisation Ministerial Conference, which reportedly drew some 7 000 delegates and contributed an estimated KES4 billion to the local economy.

However, unlikely players such as Rwanda are also getting pundits excited. The country ‘has firmly established its global position as a nation capable of staging world-class meetings, evident in its move up the ICCA Africa rankings list from 21st to 13th place in 2014’, according to Taylor. Rwanda has implemented a national economic development and poverty reduction policy (EDPRS2), in which MICE is identified as an important growth area.

‘In support of EDPRS2, the destination has made tremendous progress since 2014 with the adoption of a national MICE strategy by cabinet and the establishment of the Rwanda Convention Bureau,’ he says. 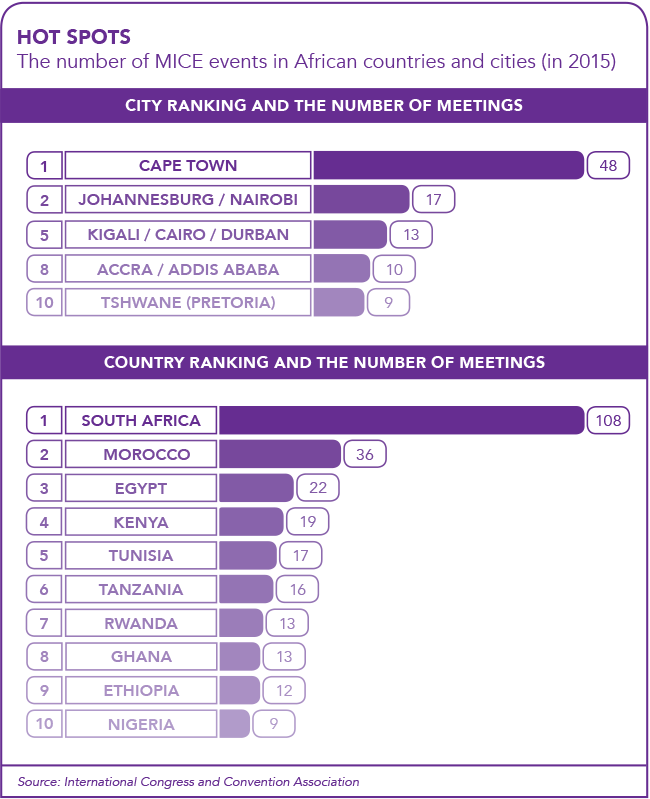 ‘To cater to international demand for meetings, the government of Rwanda invested in a modern tented conference and exhibition village in Kigali, with a capacity of up to 4 000 delegates.’ The Rwanda Convention Bureau’s sales and marketing plan is poised to push the country into Africa’s top five destinations for meetings and events by the year 2018.

‘The growing meetings and event sector in Rwanda has in turn stimulated construction of new hotels with convention capabilities,’ Taylor told Meetings magazine. ‘Last year, Kigali hosted the 535-delegate Meeting of the Parties to the Montreal Protocol, the first time this prestigious meeting has been hosted in Africa.’

South Africa, as an international conference destination, is in the top 35 globally, with the added title of the top global conference haven in Africa and the Middle East. According to the International Congress and Convention Association, the country hosted 108 meetings in 2015 alone.

South Africa is undoubtedly the shining star on the continent, with the major centres of Johannesburg, Cape Town and Durban showing robust growth.

It may be perceived as the Cinderella of the three cities but Durban is more than proving its mettle. The Durban International Convention Centre (ICC) is building a reputation as one of the world’s leading convention facilities. It has consistently been voted ‘Africa’s Leading Meetings and Conference Centre’ at the World Travel awards, having taken this title 15 times in the past 16 years.

Last year, the International Association of Congress Centres ranked it in the top 15 convention centres globally. It was the only centre on the African continent to make the list.

Despite ever-growing competition, the Durban ICC has seen a steady increase in the number of international events it has hosted over the past fiscal year, according to Durban ICC corporate affairs and marketing manager Scott Langley.

‘Africa is fast becoming an attractive option for many international associations to host their meetings,’ he says.

‘Africa offers great value for money, a range of unique experiences and many opportunities to grow their membership bases.’ Langley credits this success in part to the work done by the SANCB in promoting the continent through events such as Meetings Africa over the past decade.

‘The proven track record of the continent to successfully host international events helps build confidence in the other international markets that Africa can offer a world-class experience comparable to any first-world experience globally,’ he says.

Not to be outdone, South Africa’s powerhouse of Johannesburg is also growing.

As the country’s largest city and economic hub, says Brand South Africa, the City of Gold ‘is an increasingly attractive destination for major global conferences, having risen 133 places in the International Congress and Convention Association rankings over the past three years.

During the past financial year, the Durban ICC alone made an immense macroeconomic contribution to the country. The centre generated a total of 1.2 million delegate and visitor days, making a significant contribution to South Africa’s GDP. This is according to an Economic Impact Report compiled independently by Grant Thornton for the 2015/16 fiscal.

The jewel in the crown, the CTICC, meanwhile, contributed ZAR3.4 billion to the national GDP over the 2014/15 period and ZAR1.20 billion of total foreign exchange earnings, creating more than 8 000 employment opportunities.

International events and conferences in Cape Town are expected to increase even more, according to a News24 report, due in part to the extensive ZAR832 million expansion of the CTICC. ‘The upgrade will see the centre grow with 10 000 m2 of a multi-purpose conference and exhibition space, and 3 000 m2 of formal and informal meeting space.’ The extended CTICC is expected to draw even more business travellers to Cape Town’s CBD for conferences.

There are also expansion plans in the pipeline for the Durban ICC, in collaboration with the eThekwini municipality. According to Langley, the long-term expansion plan for the centre includes the addition of a hotel on the premises, the redevelopment of the Durban Exhibition Centre and the incorporation of a monorail station connecting the complex with King Shaka International Airport.

South Africa’s Treasury has ‘allocated ZAR110 million for a new bidding fund to enable the department to attract business events to the country over the next three years’, according to a Business Day report.

There’s a marked shift in awareness of the need for African destinations to invest in convention bureaus. The Business Tourism Company has held discussions with a number of countries in sub-Saharan Africa, and Taylor believes ‘we’ill see a lot more focus on development in this arena in the near future’.

In his view, Africa is a long-term play, but he argues that key role-players are providing the African roadmap that is marketing and selling business events to a growing and changing continent and delivering the required economic results.